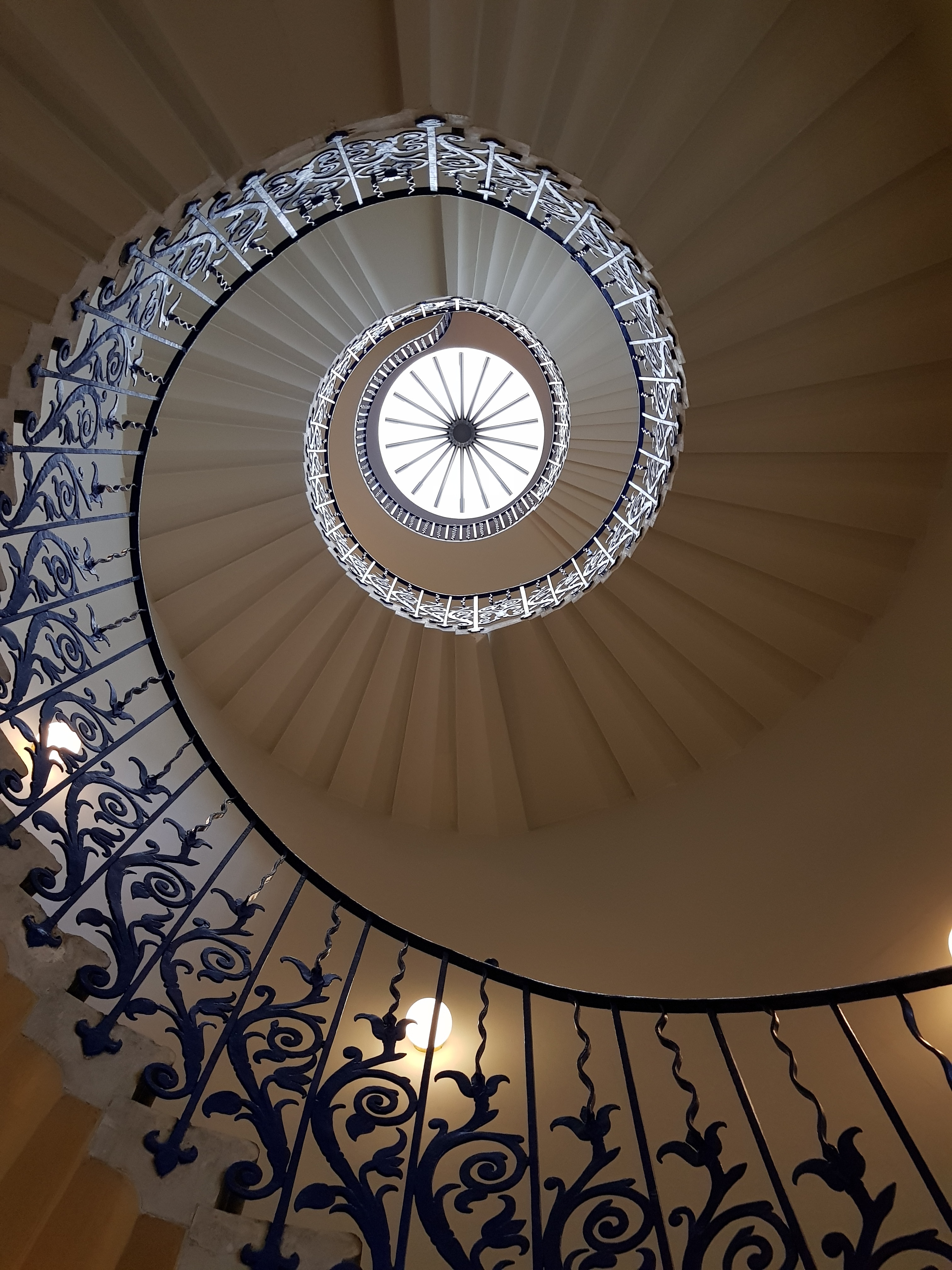 Widely known as the first Classical building in the UK, Queen’s House was inspired by architect Inigo Jones’ travels in Italy. It was commissioned by Anne of Denmark in 1616, after her husband James I gave her the manor of Greenwich as an apology. Apparently, he had sworn in front of her after she accidentally killed his favourite hunting dog. Unfortunately, she died 3 years later before the ground floor had been finished.

The house was completed in 1636, and today it houses an impressive art collection, comprising of over 450 works by such legendary artists as Gainsborough, Reynolds, Turner, Hogarth and Lowry. There is also a large collection of works by the Van de Veldes, father and son maritime painters who used part of the house as in studio in the 1600s.

Queen’s House boasts many of its original features. The house’s iconic Tulip Stairs was the first self-supporting spiral staircase in Britain. The Great Hall, which is a perfect cube shape, has a distinctive black and white marble floor in a geometric pattern.

One of the most iconic works in the art collection is the Armada Portrait of Elizabeth I painted to commemorate the failed invasion of Britain by Spain in 1588. The painting was designed to be a spectacle of female majesty, invoking feelings of awe and wonder. Having undergone a six-month restoration treatment, the painting now hangs in Queen’s House for visitors to admire.

To get the most out of your visit, book a guided tour of the house.

And if you’re really lucky, you might get to meet the elusive Queen’s House ghost.

Feb 05, 2020New Road Hotel CrewLocal, Valentine's, Food, Events
We understand that London can be a bit daunting when it comes to deciding where to go and what to do – especially when trying to impress someone special for Valentine’s Day. That’s why we’ve rounded up a whole host of fun and quirky date ideas for you and your loved one this February.
Continue Reading

Jan 28, 2020New Road Hotel CrewFood, Vegan, Local
This year’s Veganuary may be coming to a close, but our love affair with plant-based foods shows no signs of slowing down. The benefits of a vegan diet are many, but are they enough to make you give up meat for good? These East London eateries are proving that veganism isn’t just fashionable – it’s the future.
Continue Reading

Send us an Enquiry

Stay up to date

Be the first to receive special offers, exclusive event details and latest news.

A ten-minute walk from the heart of cool east London, this converted factory opened as a hotel in April. It’s a mix of old and new, with bright, retro 1970s wallpaper and neon signs paired with original dark wood and metal features.

It's young, fun and thoughtfully designed with reference to the building and area's heritage, which in this case has a personal back story and lends to its credibility. The bar is a nice spot for a drink, whether or not you are staying at the hotel, and the communal spaces make working a pleasure. All round, it's a positive place to be.

The venues are designed to emphasise the balance between work, rest and play with an open-plan layout, natural light and relaxed decor.

June 2018, Social Media Hotel in the trendy neighborhood of Whitechapel

The hotel is fully Millennial-ready: at the New Road Hotel no frills and instead great emphasis on "social spaces" laid.

Not only was the food and drink delicious, but the contemporary ambiance offered a welcomed departure from the stuffy, old-school atmosphere we’ve grown familiar with. While you’ll certainly still be able to enjoy your classic chops, Mr. White’s refined, stylish approach will give you a few new things to indulge in.

Home to 79 quirky bedrooms, a Cereal Grind all day café and a Marco Pierre White Chophouse restaurant, New Road Hotel is headed up by general manager Joost de Kruiff who knows that forging strong relationships with local businesses and residents will be key to the property’s longevity.