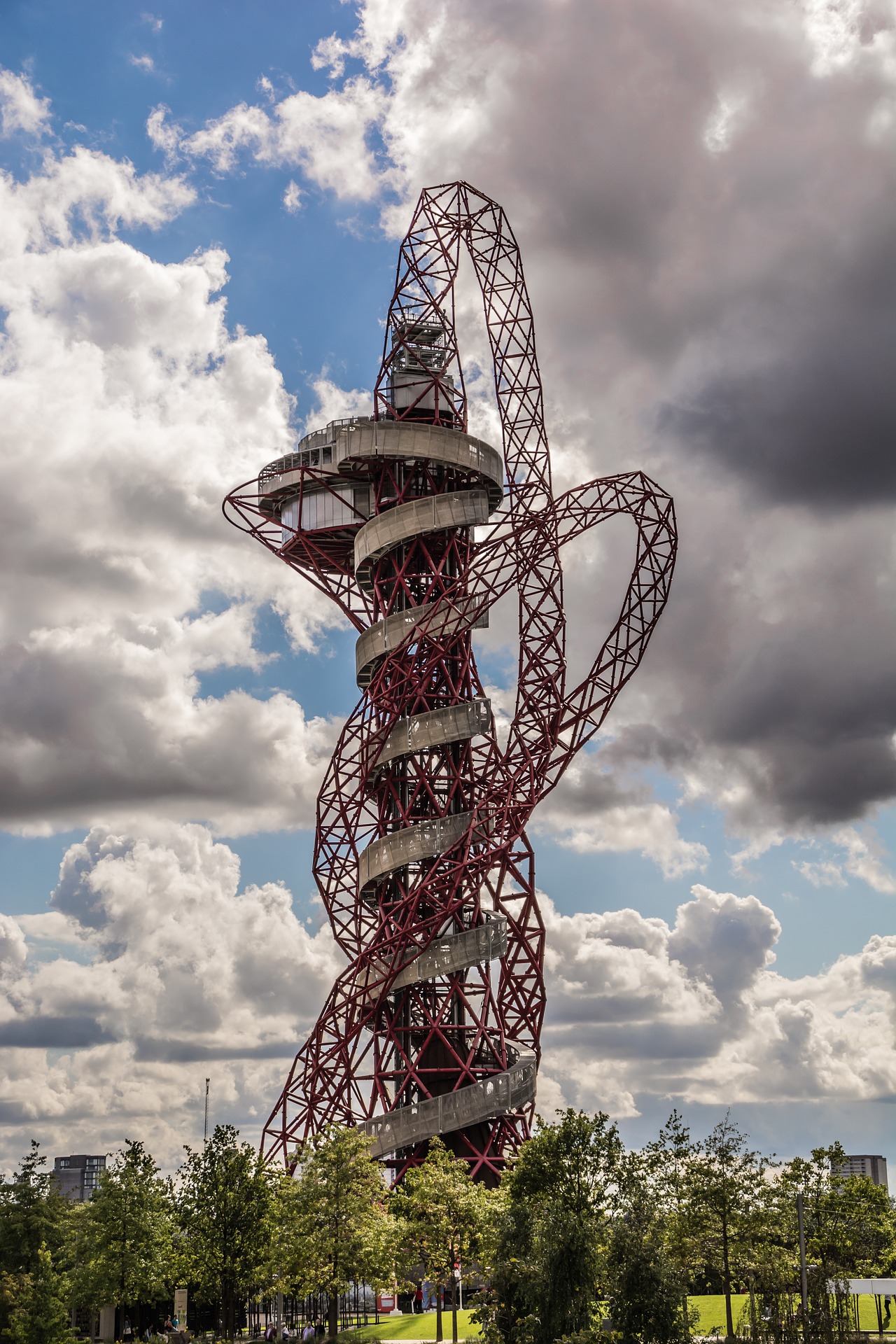 Created for the London 2012 Olympic games, the Queen Elizabeth Olympic Park offers 560 acres of urban park, housing some of the most iconic sporting venues in the country.

There’s lots to see and do across this vast urban parkland. Follow in the footsteps of Team GB and make use of the world-class sporting facilities. Take a dip in the Olympic pool at the London Aquatics Centre, get competitive at the Lee Valley Hockey and Tennis Centre. Choose from four types of cycling at the Lee Valley Velodrome, or try something new at The Copper Box, one of London’s most flexible indoor venues.

See the iconic ArcelorMittal Orbit, the tallest sculpture in the UK. Take the 34-second elevator ride to the observation deck and enjoy the views over London of up to 20 miles on a clear day. Then, if you dare, ride The Slide back down to the ground. The 178-meter tunnel slide is the tallest and longest in the world, and riders can reach up to 15 miles per hour!

For those who prefer to keep their feet on the ground, take a tour of the London Stadium, where many world-class athletes had their moment of glory. Alternatively, if you’d prefer to explore the park’s 6.5 kilometres of waterways, you can hire a swan pedalo or book a boat tour.

Nature lovers will appreciate the 30 acres of wooded areas and wildlife habitats, created by plating 4300 new trees. There are also four intricately planted gardens across the park – the 2012 Garden, the Great British Garden, the Pleasure Gardens and Mandeville Place, which features an urban orchard with its very own species of apple, the Paradice.

The park has some of the best transport links in London but is most easily accessible by public transport. It is open every day and is free to visit.

There really is something for everyone at Queen Elizabeth Olympic Park.

Feb 05, 2020New Road Hotel CrewLocal, Valentine's, Food, Events
We understand that London can be a bit daunting when it comes to deciding where to go and what to do – especially when trying to impress someone special for Valentine’s Day. That’s why we’ve rounded up a whole host of fun and quirky date ideas for you and your loved one this February.
Continue Reading

Jan 28, 2020New Road Hotel CrewFood, Vegan, Local
This year’s Veganuary may be coming to a close, but our love affair with plant-based foods shows no signs of slowing down. The benefits of a vegan diet are many, but are they enough to make you give up meat for good? These East London eateries are proving that veganism isn’t just fashionable – it’s the future.
Continue Reading

Send us an Enquiry

Stay up to date

Be the first to receive special offers, exclusive event details and latest news.

A ten-minute walk from the heart of cool east London, this converted factory opened as a hotel in April. It’s a mix of old and new, with bright, retro 1970s wallpaper and neon signs paired with original dark wood and metal features.

It's young, fun and thoughtfully designed with reference to the building and area's heritage, which in this case has a personal back story and lends to its credibility. The bar is a nice spot for a drink, whether or not you are staying at the hotel, and the communal spaces make working a pleasure. All round, it's a positive place to be.

The venues are designed to emphasise the balance between work, rest and play with an open-plan layout, natural light and relaxed decor.

June 2018, Social Media Hotel in the trendy neighborhood of Whitechapel

The hotel is fully Millennial-ready: at the New Road Hotel no frills and instead great emphasis on "social spaces" laid.

Not only was the food and drink delicious, but the contemporary ambiance offered a welcomed departure from the stuffy, old-school atmosphere we’ve grown familiar with. While you’ll certainly still be able to enjoy your classic chops, Mr. White’s refined, stylish approach will give you a few new things to indulge in.

Home to 79 quirky bedrooms, a Cereal Grind all day café and a Marco Pierre White Chophouse restaurant, New Road Hotel is headed up by general manager Joost de Kruiff who knows that forging strong relationships with local businesses and residents will be key to the property’s longevity.